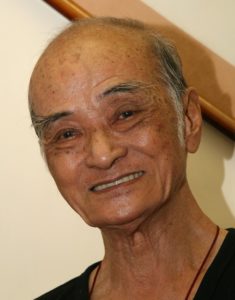 Great Grandmaster Chow Tze Chuen was born in 1925, the year of the Ox in Chinese calendar, and passed away the 4th of January 2017.
GGM Chow first joined Grandmaster Yip Man’s Wing Chun school in
Lee Tat Street in the Yau Ma Tei district in Hong Kong in 1955. In 1957 GGM Yip Man shifted his school from Yau Ma Tei to Li Cheng UK Estate. Sited in one of the poorest and oldest public housing in Hong Kong , living conditions in the new school was deplorable, claustrophobic, incessantly hot and basic sanitary amenities was absent.
Because of this, few students followed GGM Yip to the new school and new enrollment was low. To help out GGM Yip, GGM Chow organised a class comprising his colleagues from the Kowloon Motor Bus Company.

GGM Yip Man and his students in a restaurant.
Chow Tze Chuen is standing in the second row,
fourth from the right.

An interesting story lies behind GGM Chow’s learning of the wooden dummy form. As land in Hong Kong is limited, consequently living area for public housing was very small as it is still today. Because of this constraint, the wooden dummy could not be installed in the school. Rather GGM Chow overcame this obstacle by installing the wooden dummy in the terrace of a small house at Kau Wah King. GGM Yip then imparted to GGM Chow the eight sections that comprise the wooden dummy form. To achieve a flawlessly high standard of performance, GGM Chow could be found drilling the wooden dummy form every evening after his work shift. Such was GGM Chow’s dedication in mastering the wooden dummy that he even turned a disadvantage into an advantage. The wooden dummy was situated on an area grown with moss. Whenever it rained the damp moss would result in a slippery surface which made it difficult to move about without slipping. Despite this hazard, GGM Chow took this as an opportunity to develop the precision and strength of his stances and footwork.

GGM Chow was one of the first few disciples to be inducted by GGM Yip Man into the hitherto highly secretive Baat Jam Dao form. GGM Yip Man used a pair of wooden knives for teaching. Though the form was taught and its relationship to the boxing forms was mentioned, application of the knives against other weapons was not taught. GGM Yip would also stopped instruction whenever someone else came in while teaching was ongoing.

Come 1961, GGM Yip Man moved his school to Hing Ip Building in Castle Peak Road . GGM Chow was encouraged by GGM Yip Man to strike out on his own as a teacher of Wing Chun instead of following GGM Yip to the new location. To encourage GGM Chow and give his blessing, GGM Yip presented GGM Chow with a wooden dummy that he had bought from Guangzhou for GGM Chow’s new school. From this point on GGM Chow carried on the transmission of Wing Chun on a part time basis until he passed away.

GGM Yip continued to refine GGM Chow’s skill even as GGM Chow was teaching on his own. GGM Yip would visit GGM Chow to see how his class and teaching was getting on. During the course of his many visits, GGM Yip taught GGM Chow a separate wooden dummy section that focussed on kicking.
GGM Yip encouraged GGM Chow to blend in more sparring and defending techniques in the Chi Sao exercise saying that “Lut Sao Kin Kung Fu” (literally : the real kung fu is seen in free sparring). This means that the Wing Chun practitioner can check his own standard and progress in his training through his ability in free sparring practice.
After GGM Chow finished teaching class for the day, he would go out for Dim Sum with GGM Yip and took the opportunity to learn more from the Great Grandmaster.

A soft-spoken person, GGM Chow had been quietly carrying on the mission of spreading the teaching of GGM Yip Man’s Wing Chun without asking for personal gain and fame. Though he has been teaching for the past few decades, GGM Chow continues to hone his skills by practicing his boxing forms daily. GGM Chow carries on the tradition by transmitting the complete Yip Man Wing Chun system that was taught to him by GGM Yip.